As I said in my last post I was probably going to be a zombie for Halloween.  I love zombies, I have a weird obsession with watching zombie movies.  I know the reason why, but its a tad bit personal so I’m just going to keep that to myself.   A personal zombie story? Yes, there is such a thing.  Another reason I decided to be a zombie, besides the obvious that zombies are awesome, was the fact that it is the cheapest costume in the world! Any girl that has a medium sized makeup collection can create a zombie look, and even if you have a small makeup collection, you can get one of those makeup kits from Macy’s or Ulta for $20 that has about 50 eye shadows, 6 blushes, and lipsticks in a pan.  The least about of products can create the craziest look! 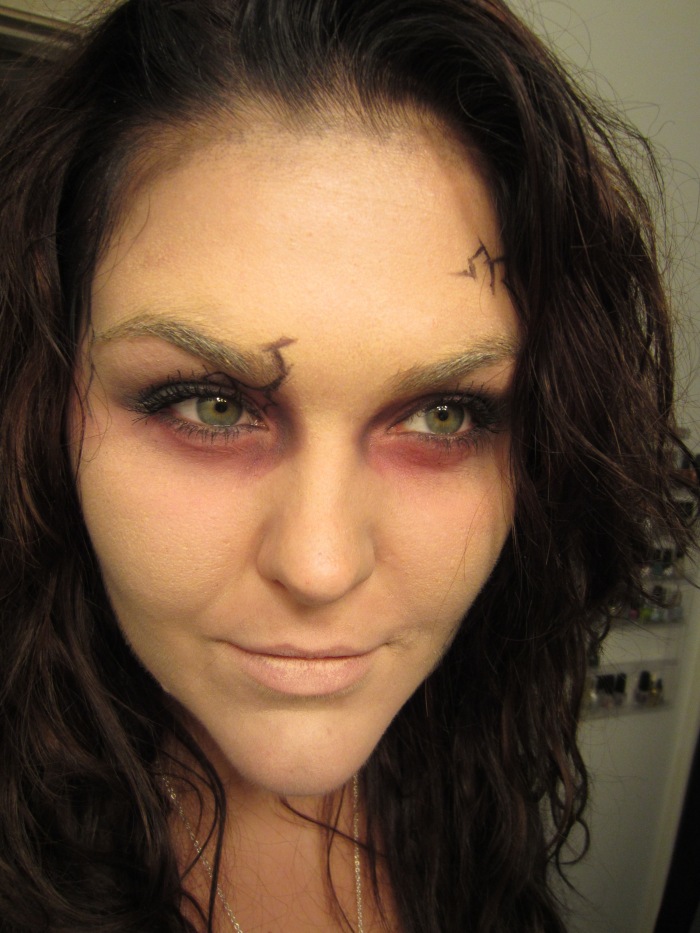 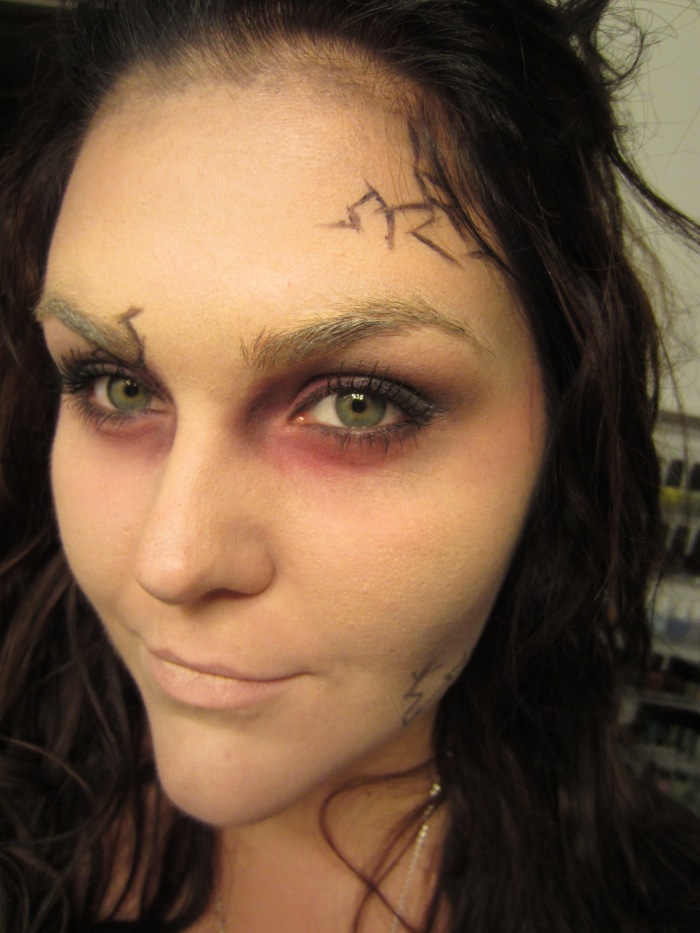 So this look can be created with 6 products and half of them are drugstore.  This whole face, just 6 products that are mostly affordable and I am not including brushes.  I used my fingers to do most of the look, I only busted out brushes for the eyes.  But in case you want ideas for the next Halloween or you are going to a zombie walk here is how I did it …

– covergirl concealer all over my face! Seriously, all over my face.  It was the lightest makeup item I had because it is my concealer for the dead of winter.  You basically want a much lighter face product, like a few shades lighter.  I didn’t go for a white face paint because I didn’t have one and didn’t want to spend the money and also dead people don’t turn pure white, they just lose color.  So regardless of your skin tone, just go a few shades lighter than normal.  I used it on my cheeks, my nose, my chin and my forehead and blended it all backwards.  So basically I highlighted the center of my face and used my fingers to bend it all back towards my hairline.  Also used it over my lips and eyebrows

– essence gel liner in berlin rocks as my contour.  This is a purple gel liner and I just dotted it in the hallows of my cheeks for a contour and up into the temples.  I wanted the purple to really make me look dead and I blended it with my fingers.

– urban decay black eyeshadow over the gel liner.  I used it to set the gel liner and also to deepen it. I also used it all over the outer rim of my face and under my jaw.  So basically, wherever I didn’t have the concealer I used the black in order for me to look more dead and also to look a little dirty (zombiesdon’t shower y’all).  So I put the black eyeshadow in my hairline and all around the edges of my face and blended it into the concealer 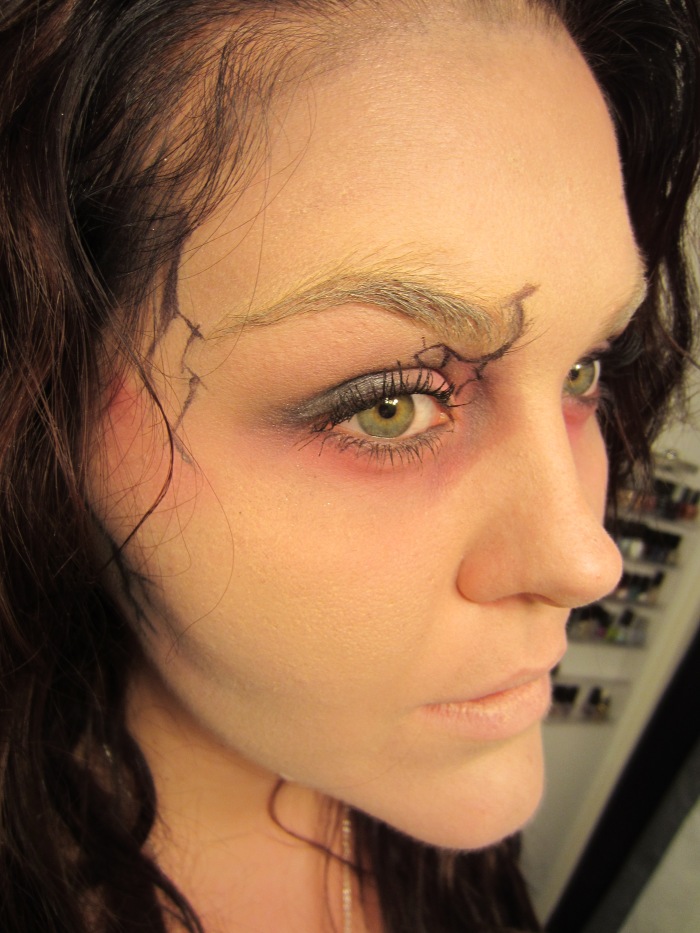 – I just kept mixing the same black shadow that used around my face with a red shadow I got from hottopic years ago.  The red and black mix I took into my eye hallow, almost all the way up to the bridge of my nose, trying to make my eyes look really sunken in.  Also I used the red under my eyes and all the way to my temple area.  This picture doesn’t show it the best but I also took it almost all the way up to my eyebrow.  I kept mixing the red and the black with different intensities of both colors.  So in some parts there is more red, and in others there is more black.  But overall there is always a mixture of red and black shadow

– Then I used just the black on the outer portion of my lid and in the crease to darken it even more.

– I used the essence purple gel liner and a skinny angled brush to create the dark veins across my face.

– Set the whole look with a setting powder!

And that’s it! I had fun with this!  And then had to take a picture of what it looked like at the bar! 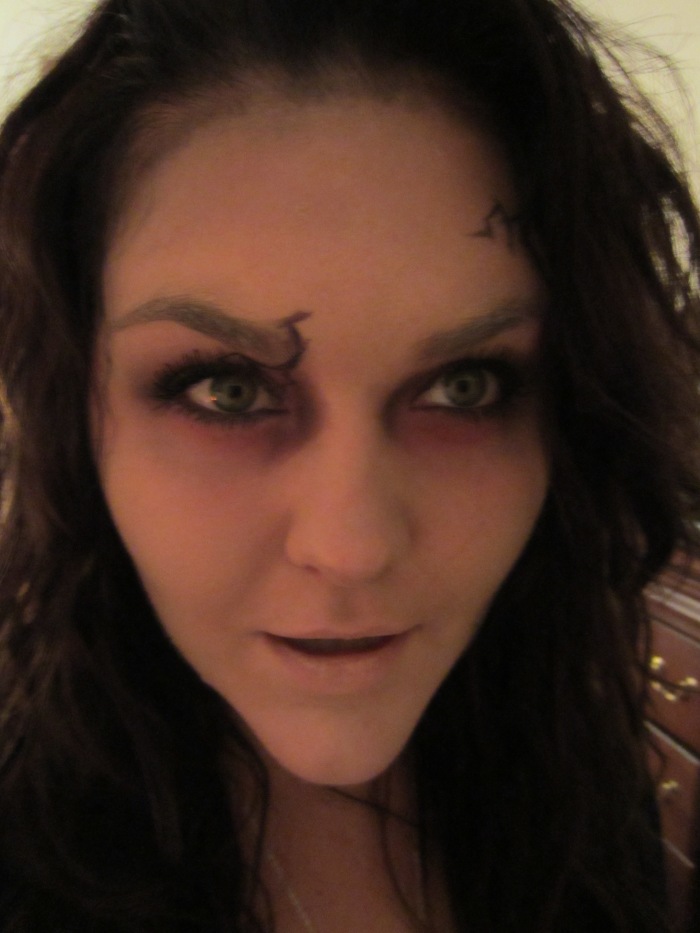 My eyes freaking seem to glow!