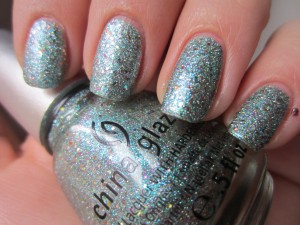 When I first heard about the Prismatics collection by China Glaze, I went crazy.  Not only did these polishes claim to be opaque glitter, but also duochrome glitter and holographic.  I didn’t think that was possible! Then I saw Scrangie’s swatches of this collection and thought I wanted every single color.  I ended up picking 2 of the 6 colors and this was the brighter of the two.  China Glaze “Optical Illusion” is a light aqua glitter with a ton of confetti glitter inside.  China Glaze describes this color as “Aqua green glimmers with a hint of purple filled with pink, yellow, silver, orange and green flecks“.  This polish reminds me a ton of OPI “Excuse Moi”.  It’s actually exactly like Excuse Moi.  Its an opaque microglitter with bigger pieces of confetti glitter inside.  This is 2 coats and I have to say, I’m not in love.  While its pretty, its isn’t holographic and the duochrome is so slight its barely even recognizable.

I tried so hard to capture the slight duochrome and really couldn’t.  But what you see in these pictures is kind of what you see in real life.  I have to say, a little preview of a post to come, I am wearing the other color I bought and like it a lot better.  Overall, while this is easy to apply and is a nice color, it didn’t live up to my hopes.  I’m not as in love as I thought it would be and I hate to say it, but I feel like OPI did it first.  If the duochrome was stronger I would have a much better review but it wasn’t worth the hype.