Please disregard the tip wear.  Honestly I took this picture on day 4 of wearing this manicure because I wasn’t hope during the day to be able to capture a picture of this polish until day 4.  But honestly I think that this is pretty good for 4 days, because normally I have chips after the second day.  I have been thinking about doing a series for quite a while now where I talk about all my favorite polishes.  So many people have asked what are my favorite nail polishes of all time and I honestly could never come up with an answer.  Who can choose just a few favorites when they have so many? And sometimes I’m in a mood where I love dark polishes for about 2 or 3 months or I want to bath myself in red nail polish. 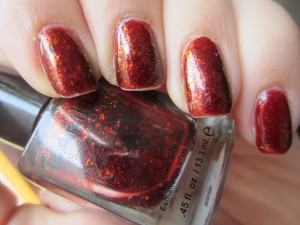 So depending on when I pick my favorites, my picks might be slightly biased and not a true representation of what my favorites are.  But I can easily pick out my favorite reds or blues or greens.  So I’ve been planning on doing a series on my Youtube channel and here featuring all my favorite (insert whatever color) polishes.  So I was contemplating all my picks for my first category, red polish, and I instinctively gravitated towards this polish.  I don’t own too many Barielle polishes, but the ones that I do own, I am very impressed with.  The formula on Barielle polishes seems to be on the thick side from what I’ve experienced with my 4 polish Barielle collection.  But if they continue to release colors like this, I’ll deal with awfully thick formulas. 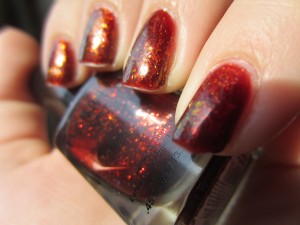 Barielle “Elles Spell” is a thick red jelly polish.  In the bottle it looks like a deep burgundy, but since its a jelly it turns out much lighter on the nails.  Suspended in the red jelly base is a ton of flakies.  I bought this polish when it came out almost 2 years ago when the only red I would touch was a deep dark red that had to be bordering black for me to wear it.  After buying this polish and discovering that its a jelly and much lighter on the nail, I was a little disappointed because I didn’t like red polishes.  But oh how I was wrong! I wore this for about 20 minutes and was mesmerized! This polish started my love affair with red polish and has opened the door to so many amazing red polishes.  If it wasn’t for this polish opening my eyes to the sexiness of a red nail, I might still be scared to go that traditional.

As you can see from the pictures, the bottle is almost two thirds empty.  Just means that I will have to repurchase this polish relatively soon because in my opinion, this polish is a must have despite its dodgy formula.  This is 3 thick coats and feels like you have a shellac manicure on (that’s how thick it is!).  Since it is a jelly formula it is a little sheer but being really thick makes it kind of a pain to work with.  The dry time is also a little slow since it is so thick.  But what is awesome about this polish is the flakies suspended in a pigmented jelly base.  The flakies are that traditional orange, yellow and green flakies, but the fact that they are suspended in a red base, it makes them look mostly orange.  The flakies makes this polish phenomenal because it seriously looks like your nails are on fire! A red base with orange flakes that shimmers to a yellow makes it like real flames.  That is another reason why this polish deserves to be in every collection.  An amazing red polish, a pigmented jelly formula, a flakie, and when put it together you’re like the girl on fire (sorry I had to throw in a hunger games reference).

Sorry this post is so long but what do you guys think? Do any of you own this polish? What are your thoughts?