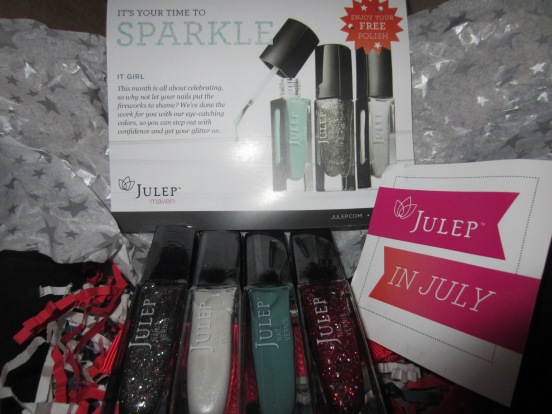 I know I said I was going to cancel my Julep Mavens subscription but I’m a wuss and a hypocrite.  I talked myself out of it because some of my favorite polishes are Julep.  Julep is the ultimate hit and miss company.  I either love what I get or I absolutely hate it.  I always hold out hope that I will get a “holy grail” type polish and more than half the time I’m disappointed.  But I ended up just skipping June and when I found out that I was going to get 4 polishes rather than my normal 3 in my July box, I decided not to skip.  And now I’m very happy that I didn’t.

I got the 4 polishes you see in the picture below, and then Julep always sends a “freebie”.  The last couple freebies I’ve gotten have been really disappointing and this month was no exception.  They included in my box ONE fireball candy.  I’m not the biggest fan of those balls of cinnamon candies and the fact that I got one was really dumb.  I threw it away right away. But the polishes made this months box worth it. 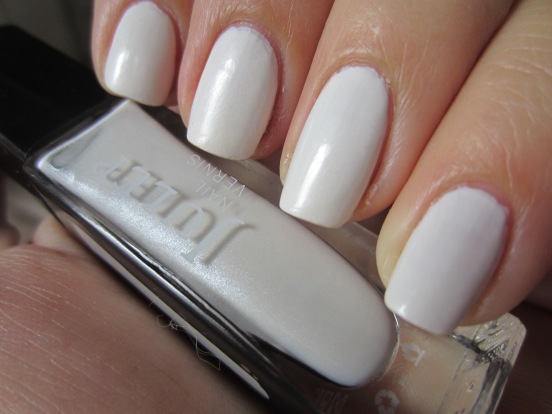 “Kate”: Kate is an opaque white polish with a slight pearl sheen.  The shimmer shows up more in the bottle than it does on the nail.  I was the most excited to get this polish because I’m a huge fan of white nails in the summer.  When I first saw it in the bottle I was so scared that it was going to be a sheer and pearly mess, kind of like other 90s polishes.  But it was completely opaque in 2 coats and the shimmer is subtle.  This is more opaque than other whites that I have in my collection right now.  It was a little runny on the first coat, but after the air got to the polish it was a little easier to deal with on the second coat. 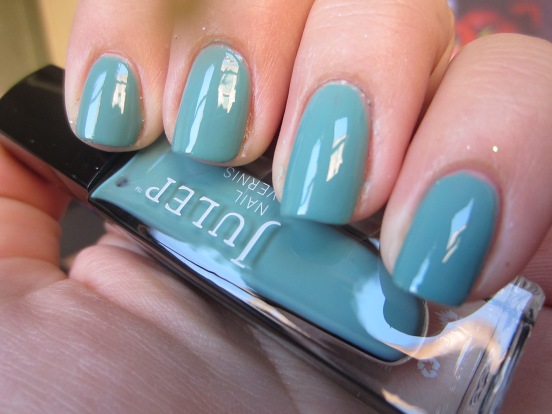 “Daphne”: Daphne is a muted teal green creme.  It is virtually identical to so many other polishes in my collection.  OPI “Mermaids Tears”, Misa “Dirty Sexy Money” and a few others that I can’t think of off the top of my head.  Although the polish isn’t necessarily unique, it was a great formula.  A little on the thin side but this was opaque in 2 coats and dried pretty quickly.

Now onto the glitters! 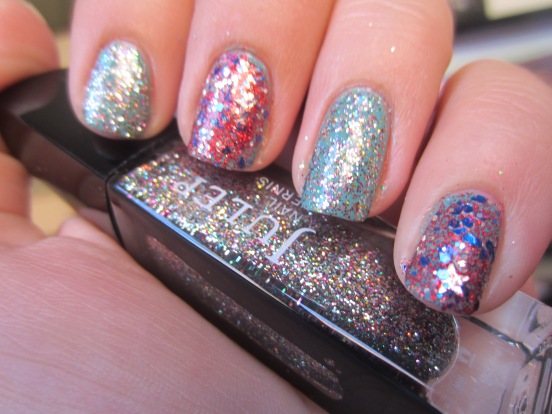 “Mila”: Mila is on the index and ring fingers.  It is a multicolored micro-glitter suspended in a clear base.  There are pink, blue, green, gold and silver and maybe even a little bit of orange in there as well.  This is just 1 coat over Daphne, and as you can see it is pretty dense.  I think it is dense enough that it would be completely opaque on its own in 3 coats.  It wasn’t thick at all and went on really smoothly and even.  Similar to Daphne, while its easy to work with, it isn’t very unique.  There are so many polishes like this on the market that you don’t need this one. 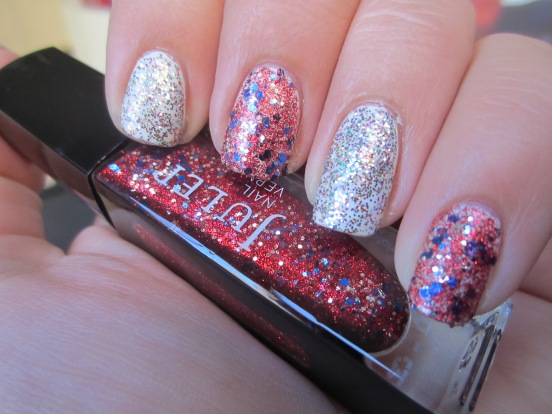 “America”: America was the free “surprise” polish this month.  This was in every box for people with an American address, and then the people in Canada got the Canada polish.  I was not really excited about this polish, mostly because I really don’t like glitter that is any shape other than round.  I know that might sound odd since I’m a glitter-aholic, but I don’t like bar, square, hearts, stars and any other shape that isn’t a circle or hexagon.  The stars did not come out easily, as you can see I didn’t get a single star on my middle finger or pinky.  But in the other picture I got 2 stars on my middle finger and 1 star on my pinky.  On the bright side, this polish is super dense and I absolutely loved the blue, red and silver together.  As long as I can avoid the stars I think I can totally wear this on its own and it would be opaque in 2 coats.

Overall, while I still think the freebies then send are really dumb, the polishes this month blew me away.  2 of them were rather ordinary but the formulas were all amazing.  I really loved Kate and America and I have a feeling  I’ll easily go through both bottles rather quickly.

Are any of you a Julep Maven? What style profile are you? What polishes did you get? And what are your thoughts!?