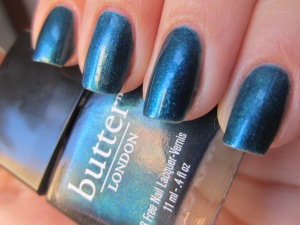 A few weeks ago I was browsing through Instagram when I saw one of the girls I follow, 86TaraMae, post a picture that she purchased 3 Butter London polishes and a matte top coat for just $11. I about crapped my pants and immediately went through a crazy Instagram search trying to find out how she did this.  I found out that there is a new website called Coterie that is supposed to be similar to Hautelook.  Coterie is a new flash deal website that exclusively sells makeup, skincare and nail polish.  So I signed up and immediately went to the Butter London sale.  The sale was 3 Butter London’s plus a top coat for $36.  But for your first order, you had a $25 off code (there are several that I’ve found so far, the code I used was VIPMEMBER).  So 3 polishes plus a top coat that would normally cost of $60 for just $11, I was sold! You got to choose between 6 different Butter London polishes, and surprisingly, I only owned 1 out of the 6 they were selling. 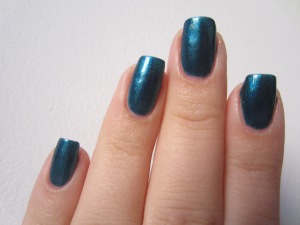 This was the first out of the three polishes that I picked up from Coterie.  Butter London “Bluey” is a blue/teal metallic.  In some lights it looks really blue and in others it looks more teal/green.  The reason I picked this up is because its a shade that I really was drawn to and also I’ve had China Glaze “Watermelon Rind” on the mind lately.  I know its not Watermelon Rind but it seemed similar to me.

Formula wise, I was really disappointed at first.  The first coat was practically clear.  It seemed like a clear coat with flecks of green and blue.  I was really upset, thinking it was going to be a 4 coater.  But this is just 2 coats! I don’t know how it even happened but the second coat made it completely opaque.  Have any of you ever experienced a polish like that? Dry time was pretty good and the staying power was nice as well. No complaints really besides that the first coat was practically non-existent.

Little mini review on Coterie.   So far I’m not impressed with Coterie.  I know they’re new so I’m giving them the benefit of the doubt but its a really weird site. I rushed to get this deal, thinking that this website was exactly like Hautelook.  This deal went on for about a week and a half.  Coterie so far doesn’t run daily deals, nor does it have “true” flash sales.  The sales stay up on the site for a good week or two before then come down.

Also, besides the Butter London sale, I haven’t seen anything on that site that is popular or something I’ve ever even heard of.  At the bottom of the site they have had a banner that says “Upcoming Sales: Stila Cosmetics”.  Well, that banner has been there for over a month (since I signed up), and I’ve ever seen Stila on there.  The things that have been on there have been extremely expensive (like a 5 piece brush set for $75).  Shipping was really fast though, so high five for that.  Also, they have you save your credit card information on that site as well, it isn’t like Hautelook where you have the option of using pay pal.  Overall, I’m not really impressed but this deal was so amazing that I’ll keep my account open just in case there are any other deals like this one (or if they ever run this again!).

If you want to check out Coterie, you can go here! That is my invite link, so if you don’t want to use the invite link, then you can just go to Coterie.com.

What do you guys think? Do any of you have this polish? Did any of you know about this sale and partake in it too? Are any of you members of Coterie? Let me know your thoughts!