A few years ago I saw a video on YouTube by Tiffany D that was all about blue mascara.  I always thought that blue mascara was so 80s, something old women would wear, or overall was very trashy.  Well, Tiffany D completely changed my mind. Not only did she explain that blue mascara (or blue liner for that matter) made the whites of your eyes look a lot brighter, but showed that you can wear it tastefully.  She showed how to wear it so you wouldn’t be able to tell you were wearing anything blue on your eyes.

Every since then I’ve been casually looking for a cheap blue mascara.  I was curious to see if the results would be similar on me but I didn’t want to invest the money in an Urban Decay mascara or a MAC mascara.  Whenever I would remember I would casually look at the mascaras in the drugstore to see if they had a blue version.  Then Maybelline came out with a limited edition line of their timeless mascara in a variety of different colors.  I quickly snatched up the blue one, called Blink of Blue.  They also had a purple, green and teal!

Keep reading for pictures and my review!!

WARNING: I’ve never tried the original Great Lash so I couldn’t tell you how this formula or brush compares to the original.  I have no idea if this is a departure from the normal Great Lash.  All I can report on is how this mascara has been working for me.

The brush is much smaller than any other brush that I’ve ever used.  I don’t know if that is the same for the normal Great Lash, but this one is extremely small and has the traditional bristles.  The bristles also go in a spiral shape down the wand.  The formula is on the wet side, but not so wet that it is an issue.

Now on to how it looks! 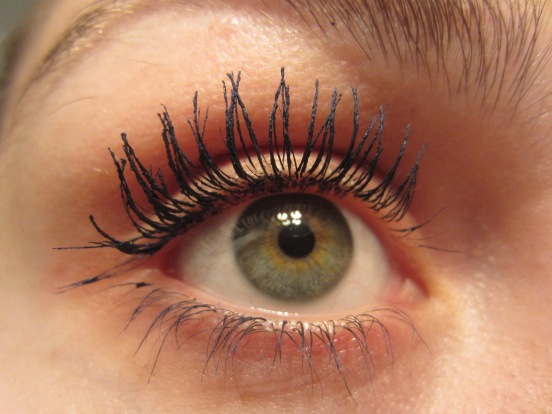 2 Coats on the top lashes, 1 thin coat on the bottom lashes

What I like: I like that this mascara can be applied thinly or thickly.  You can see from the top and bottom lashes that I tried 2 different methods of application and got very different looks.  I applied 2 very thick coats to the top, and 1 very thin coat to the bottom lashes.  The more coats you use, the less blue the mascara looks.  Love the price! I think I paid $3.99 for this.

What I don’t like: This mascara is a little gets a little clumpy if you apply too much too fast, or don’t let the first coat fully dry before you apply another coat.  I also don’t really like the fact that the blue color gets lost the more coats you use.  I bought this mascara because I wanted a blue mascara.  Well, it doesn’t really show up blue if you wear too much.  Also, this mascara smudges on me after a few hours.

I had to see what it would look like with a flash.  I had used the Cover Girl Lash Blast Luxe, the lash blast mascara with different colored glitters in the formula, and whenever it would get hit with a flash of a camera my lashes would be bright blue/green/purple whatever color glitters were in it.  So I had to know what this would look like if a flash hit it.

Sorry for the blurry quality of the picture.  Its hard to get a macro picture to be in focus when you’re using a flash!  Anyways, the blue is a little more prominent with the flash but still it isn’t overly apparent that you’re wearing blue mascara.

Overall, I like this, don’t love this.  I like it for my lower lashes but not for my top lashes.  It does seem to make the whites of my eyes brighter and I really like the soft effect on my lower lashes.  But it is a wetter formula and does tend to clump.  If you’re looking for a cheap fun mascara, this might be a good alternative.  But if you’re looking for an amazing mascara that really shows up that color on your lashes, you won’t find it with this one.