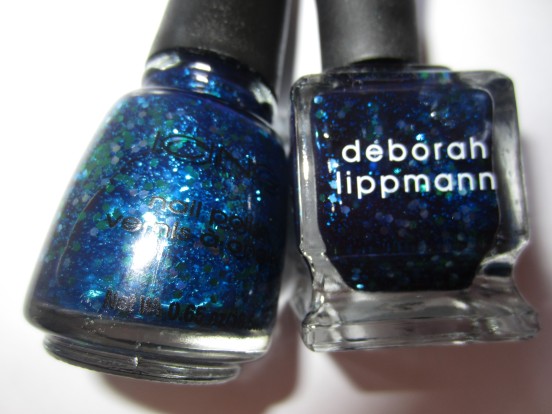 I few days ago I featured Icing “Hey Sailor Boy” and said that the whole reason I bought that polish was because it looked so similar to one of my favorite polishes of all time, Deborah Lippmann “Across the Universe”.  I also gave some hints as to a comparison post.  Well here it is! I had to know if these polishes were true dupes and let you guys know if there is a much cheaper alternative to this ultra-popular polish.

Keep reading for swatches and my thoughts!

Judging from the first picture above, the Icing polish looks a lot lighter. But is it lighter on the nail? 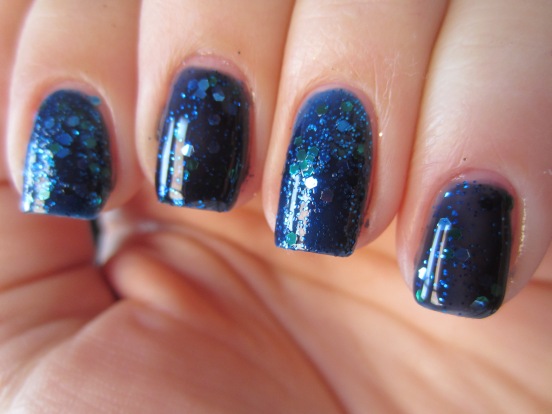 Wow, awesome swatching skills Holly! Way to stay in the lines!  These definitely aren’t dupes! But they are similar.

The major differences that I can see between these two polishes are the color, density of glitter, and finish.  The color of the icing is a brighter, more cobalt blue while the color of the Deborah Lippmann is a deeper navy blue.  Both shades of blue are very similar and really close in tone, but the Icing is slightly brighter.  The Icing is also a little denser with the microglitter and the chunkier glitter.  The Deborah Lippmann has a much much glossier finish and also has a smoother finish once its dry.

There are major similarities too though, both have the same type of glitter and the same colors of glitter.  Both are a blue jelly base and both of the swatches above are 2 coats.  Both have a similar formula and a similar dry time.  The brushes on both make it easy to pick up glitter and you don’t have to move any of the glitter pieces around the nail

My verdict, they aren’t dupes but they’re similar enough that you don’t need both.  Personally, I like the Deborah Lippmann better because its glossier and has a depth to it that the Icing loses. The dark blue sheer base is opaque in 2 coats but really makes it look like the night sky.  But if you don’t want to spend $18 on the Deborah Lippmann or the price of shipping if you have to order it online, the Icing is a great alternative.  Only negative with the Icing is that as far as I know the only Icing stores are in the US and there website doesn’t have an option for shipping.

If you’re in the US and want a similar polish to a Deborah Lippmann that only costs $4.50, Icing “Hey Sailor Boy” is a great alternative.  But it doesn’t take the place of Across the Universe in my world.

What do you guys think? Which one wins? Which do you like better?

3 thoughts on “The Look for Less! Dupe Alert?”