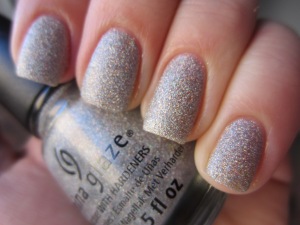 I just have 2 days until my first law school final and should probably be studying right now.  I think I’ve made about 4o0 handwritten flashcards in the last 4 days, and I have one broken nail to show for it.  I still have an entire subject and a half to go, so I’m thinking that I’ll have written about 600 flash cards once I’m finished.  I haven’t really been painting my nails, and right now they look like a crazy hodgepodge of different glitter combos.  I needed to take a break to make myself dinner, so I figured I would write a blog post as well to get my mind off the Federal Rules of Evidence and how much I want to give myself a manicure.  Blogging has always been an escape from my every day life, so I figured I would escape from studying and show you guys another awesome holiday polish. 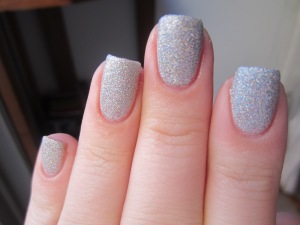 China Glaze “Glistening Snow” is a holographic silver microglitter in a clear base.  I was kind of hesitant to buy this one because when looking at the bottle in the store it looks exactly like all the other silver holographic microglitters, like China Glaze “Fairy Dust”.  I don’t own Fairy Dust, but this polish didn’t seem that unique to me.  I grabbed it anyways because I don’t have one like it in my collection and I don’t think its anything like those other polishes.  Glistening Snow is seriously dense! This is 2 coats and its completely opaque! What I like the most though, is that this really does look like snow to me.  The gritty, almost matte texture of the glitter, really does make it look like freshly fallen snow and the holographic shine is like when sun hits it snow.  I think I love this polish more for what it reminds me of than the color itself, but I really really think it is the perfect winter and holiday shade, especially for those of us who live in an area that get a lot of snow (thinking of all the blizzards of feet of snow to come) 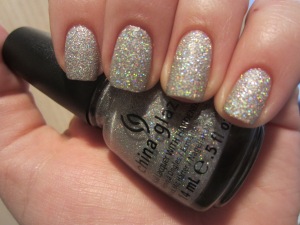 I had to take a picture with the flash to make the holographic sparkles really come out.  In real life, the polish isn’t that holographic unless you’re under florescent/indoor lighting.  I kind of like that about it, the fact that the holographic is subtle, but that isn’t going to be everyone’s cup of tea. If you’re looking for a rainbow glitter on your nails, this one isn’t for you.  If you’re looking for a subtle shine for a gritty looking glitter, then this one is perfect.  The formula on this polish was just ok.  It dried really quickly, which is nice, but it also does drag.  If you do the simple 3-stroke application then you won’t have a problem with cuticle drag, but if you play with your polish like I do to get it as close to the cuticle as possible, then you might have an issue.  This is 2 coats but you might need a 3rd if you have bald spots.  Also, the brush does get a little goopey because its a dense microglitter, and that’s whats expected.  Other than that, its a good formula and easy to work with.

I really like this polish, its subtle and China Glaze did a great job at capturing the look of freshly fallen snow on a sunny day in nail polish form.

And thank you so much for being patient with me as I get through finals, hopefully in one piece! You’ll be getting regular posts and reply’s to your comments in just a week when all this is over!