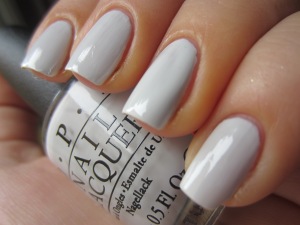 So you guys know that I have a love affair with white nail polish! If you don’t, well I’m a tad bit obsessed every single summer.  I think I can count on both hands how many bottles of nail polish I’ve ever finished, (and I mean really finished not just thrown out because it was too thick or frankened with, using up half the bottle), and half of them are bottles of white polish.  I’ve been through 2 this year alone, which is a big accomplishment for someone with a lot of polish! So when this polish first came out, I wanted it so bad but told myself, “Holly, you have 4 bottles of white nail polish right now, you don’t need an off-white.” I passed on this one over the summer, but as luck would have it, I was looking through the Ulta clearance section about 2 months ago and this was on sale for more than half off! I figured that fate was telling me that I needed this polish, and quickly snatched it up.  After wearing it, I’m mad at myself that I didn’t buy it when I really wanted it over the summer.

OPI “My Boyfriend Scales Walls” is a slightly off-white creme.  The polish has a slight grey tone to it, which you can only really tell when you have it next to a bottle of pure white.  But it really just looks like a softer white once its on your nails, rather than a stark “white-out” type of look that other white polishes give.

The formula on this polish is what made me fall in love.  I knew I was going to love the color because I love white nails, but this is one of the best formula “white” polishes I’ve ever used! If you like white as much as me then you know that a ton of white polishes are patchy, streaky, uneven and takes normally 3 coats.  This was fully opaque in 2 thin coats! Also, the formula is on the thinner side and not streaky or patchy at all.  It applied like a dream and dried pretty quickly as well.  I think I found my new favorite white, even though there is a slight grey tone to it.  It almost makes it look like snow on my nails and although this was released in the summer, it might turn into one of my favorite winter polishes!

What do you guys think? Do any of you have this polish? What are your favorite white polishes?