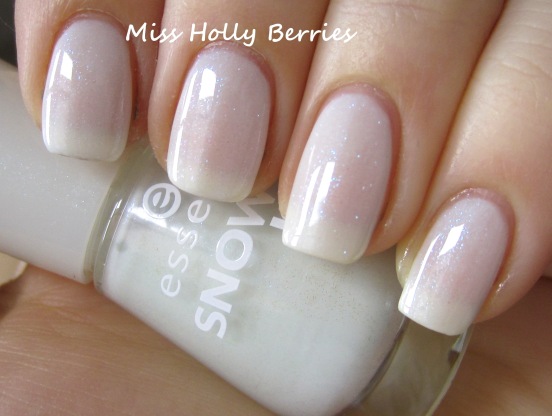 For all of you who have been following my blog for a while then you know that I have a love affair with white polish.  White is my signature summer color and has been for several years.  I always would go for the most stark white cremes, the ones that looked like white on your nails.  Recently, I’ve really been enamored with the milky whites that seem to be making a come back in the nail world.

I have always avoided milky whites, feeling like I would like them. But others know me better than I know myself! This is another polish that was sent to me by my lovely friend Anca over in the Netherlands.  She knew I loved white so she sent me a new one from Essence, and I’m so glad she did because now I have a milky white and I’m positively in love.

Essence “Top of the Ice Stream” is a milky white base with blue, and a little gold corporatist shimmer.  The shimmer is very subtle on the nail and really only the blue is visible, but it a little bit more interesting than a simple sheer white.  I know that sheer whites aren’t everyone’s cup of tea, and really weren’t mind until recently.  This just looks so clean and classy.  And even though you can my visible nail line, I love that.  My years of nail biting has instilled this weird obsession with seeing the visible nail line.  It reiterates that my nails are long enough to actually have a nail line! 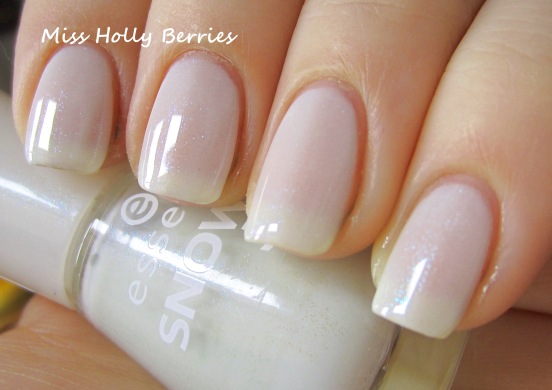 The formula on this polish was pretty sheer, which is what I expected.  But even though it is sheer, it evens out on the nail.  I have seen so many sheer whites and pinks that just look streaky, even after 3 coats.  This one evened out nicely so I could wear it with just 3 coats and still have the visible nail line.  And the dry time was really nice as well.  Even though it does take 3 coats to be opaque, it didn’t take forever to dry on the last coat.  I absolutely love it and really want to pull it back out again and wear it tonight!

What do you guys think? Are you a fan of milky whites, or do you normally pass on these?

21 thoughts on “Essence “Top of the Ice Stream””