(Disclaimer: this was provided to me by the company.  These opinions are 100% my own, and I’m not sponsored for this post)

Yes, you read the title right … This is a review on a razor.  Why? Because (spoiler alert) this is the best razor that I’ve ever used! And I feel like I need to share the knowledge of this razor to the entire internet world.

I’ve never been one to really care about the razor that I use.  Most of the time, I would by the 5 pack of disposable razors for a dollar at the drugstore, ya know, the ones that are pink and white and totally generic.  I’ve spent more money on the Gillette’s, the Venus’s and the Schicks, but in the end I never thought that they were anything so special that they deserved to be priced at $10 or more.  But this razor has totally changed my mind about the importance of a good razor! 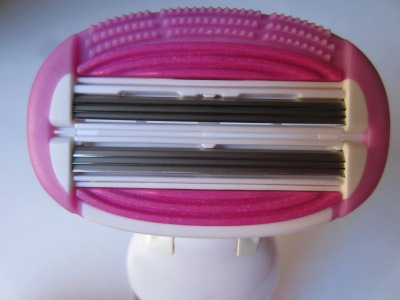 This is a 6 blade razor that is surrounded by pink rubber.

What I like: I LOVE the price!  While this razor isn’t available in stores in the US (I think its available in stores in other countries), and you need to factor in shipping prices, this razor is still half the price of other high end razors!  I didn’t take a picture to show you, but this razor is extremely bendable.  It is really flexible at the base so it slides over my skin really nicely.  It also bends in half, right in between the rows of blades.  So you can literally get any nook and cranny that you can think of.

I also love that there are 6 blades! I’m not going to lie, when I first saw that there were 6 blades I had flashbacks of a skit from Mad TV on Saturday nights where they were making fun of mens razors.  They called the razor the Mach 10 and it would take a layer of skin off with your hair because of the insane number of razors.  So when I saw 6 blades I was having nightmares about the crazy cuts I was going to get.  But I still have yet to get a single cut! The 6 blades give me the closest shave I’ve ever gotten in my entire life, without having to go over 1 spot more than once.

What I don’t like:   This has NOTHING to do with the razor, but the docking station that it comes in will not stick to my shower wall.  But that is my only trivial little complaint!  The razor itself is incredible, no complaints there!

Overall, I’m in love and I felt like I needed to share it! This razor gives me the closest shave that I’ve never gotten in my entire life! It has extended the amount of time I can go in between shaves.  Right now I’m feeling my legs and on day 3 I’m still pretty smooth! Most of the time I have to shave every other day or else its stub-city.  If you guys are in the market for a new razor, you need to put this in your amazon cart ASAP!

(This was provided to me from the company for my honest review.  These thoughts are 100% my own)