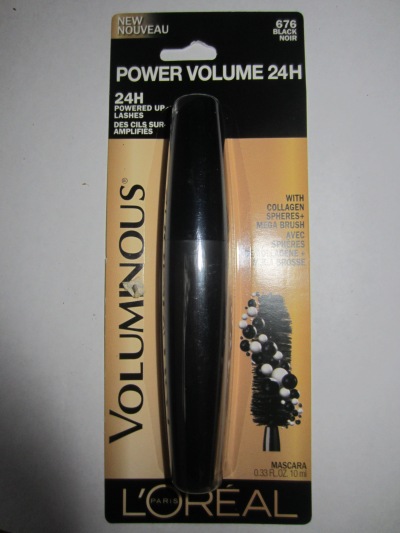 I picked up this mascara back in 2012! Although it was December or November 2012, saying that I bought it last year has so much more impact.  I picked this up when I was having a weak moment with mascara and had about 10 open tubes in my collection.  So I kept it in its packaging until I used up all my other mascaras.

So now that I’ve used up all my old mascaras, I let myself open it.  Its been a while since I’ve tried a Loreal mascara, and I must confess that I’ve always been partial to Loreal.  I think Loreal is my favorite drugstore brand for mascaras, because I don’t think I’ve ever had a bad experience.  So how does this mascara stack up?

Keep reading to see what I think and to see this on my lashes!

The brush on this mascara is MASSIVE! I know that volumizing mascaras have really large brushes sometimes, but this is one of the largest I’ve never used from Loreal.  Its a regular bristled brush that has a classic mascara brush shape.  However, that brings some negatives as the mascara gets older because the bristles start to stick together.

What I like:  this mascara does give amazing volume! It gives the blackest base to my lashes and makes it look like I have liner on! Also, it does a pretty good job of coating every lash and giving my lashes that fluttery look.  I also love how dark the mascara is!

What I don’t like: This mascara flakes pretty badly by the end of the day.  Even when I just apply it, it looks like it might be flaky.  But fast forward 8 hours and its flake city! Also, a TON of product comes out on the brush.  It doesn’t create clumping, but it does mean that this mascara dries out a lot faster than other mascaras because more of the product is exposed to air.  Plus, it doesn’t do much for length.

Overall, this is a good mascara but I don’t think I would repurchase.  It does amazing at volumizing and makes my lashes super dark, but by the end of my day I’m constantly wiping off little black flakes on my cheeks.  If I use this as a layering mascara though, wow! It is a great addition to any layering combo because of how much volume it gives!